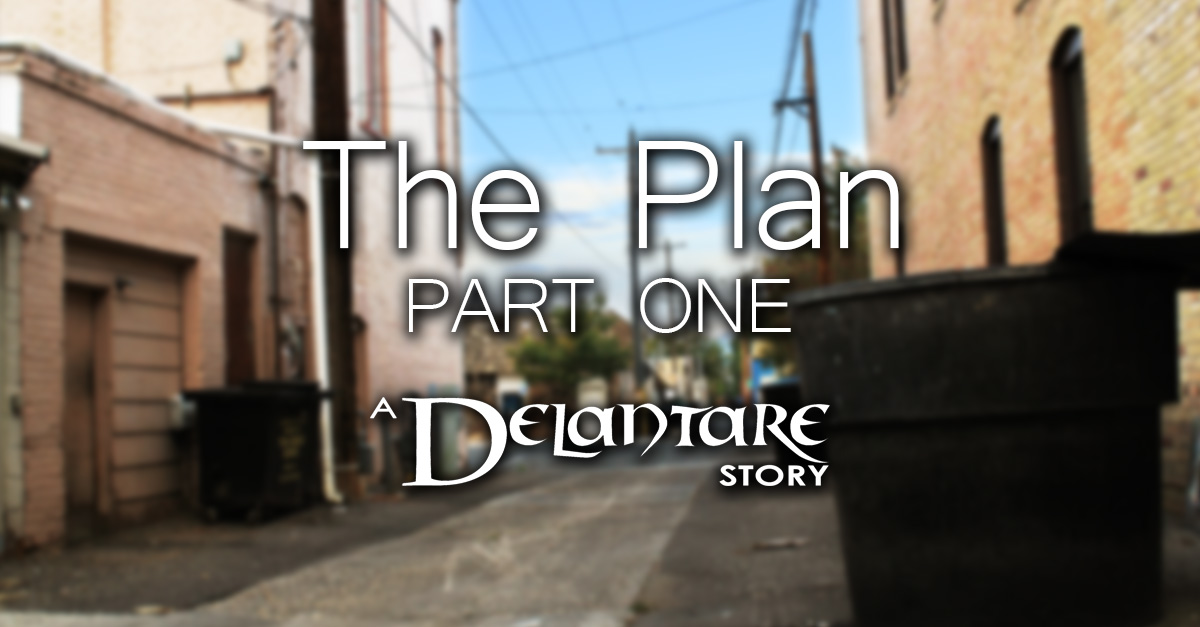 Andrew’s breathing was finally slowing down as he crouched in the alley between two large dumpsters.  The police sirens had moved on, and the noise of the city was settling back into its usual dull rumble.

Andrew checked himself, just to make sure that crazy convenience store clerk hadn’t winged him in all the shooting.  He was in his early thirties, and the black shirt and jeans he wore complemented his athletic figure well.  He seemed to be unscathed… which was more than he could say for Mark and Jimmy.

Andrew grimaced at the all-too-recent memory of his accomplices being shot down by the 12-guage shotgun the clerk had whipped up from under the counter.  He desperately tried to think of something else as he felt his stomach churn.

Andrew pulled himself up to his feet, using the alley wall to steady himself as his knees trembled.  The whole operation was a fiasco, and it was a miracle he was able to escape without being shot or being caught by the police who arrived moments after he fled.

It should have been a simple robbery.  Just a quick cash grab, in and out.  Three of them, one clerk.  Andrew hadn’t even loaded his pistol, figuring the sight of three guns in her face would’ve been enough to scare the old lady into emptying the register.  It should’ve been as simple as Bolton had said.

A frustrated sigh escaped Andrew as he thought about how he was going to explain to Bolton what happened.  He had a good rapport with the gang leader, but he had seen just how devastating the man’s hair-trigger temper could be.  Andrew briefly wondered if he could beat Bolton in a fight if he had to defend himself, but he quickly dismissed it.  Sure, he could hold his own, but Bolton was huge.  Even if he did manage to beat him, he’d get such a pummeling in return, it probably wouldn’t be worth it.

A car passed one of the alley openings, interrupting Andrew’s train of thought.  He needed to move.  He quickly stripped off his black shirt and jeans and chucked them, along with the balaclava he wore at the store, into separate dumpsters, leaving him in a white v-neck shirt and snug jogging shorts.  He plugged some ear buds into his phone, and shoved it into the shorts’ pocket.  He moved to the opposite opening of the alley, confirmed he was clear, and took off at a casual jog, making sure his route wouldn’t cause any suspicion if someone was watching him.  Thankfully it was the middle of summer, so his disguise didn’t draw any undue attention.  In fact, he passed two other people out on their own evening jogs.

As he made his way toward the gang’s hideout, Andrew began to analyze what went wrong with the convenience store job.  How had they not known the clerk was armed?  Bolton had sent people in to case the place over the past month.  They should’ve known about a big, freaking shotgun behind the counter!

Andrew’s jogging slowed as he felt a suspicion rise in the back of his mind.  What if Bolton did know and he sent Andrew in anyway?  Andrew had been disagreeing with Bolton’s orders more lately.  The plans were becoming too big, too risky.  The targets were becoming too sophisticated for a small band of petty thieves to pull off.  And then there were the women that Bolton had started taking in, straining their already limited resources.

Andrew had recently voiced his concerns that Bolton was being too reckless, which had turned into a shouting match that would’ve ended in a fight if one of the new girls hadn’t stepped in.  Bolton had about decked her for that, but he restrained himself, instead storming off to, Andrew presumed, blow off steam elsewhere.

The thought came again as he approached the back entrance of the tumble-down building that the gang used as their base. Did Bolton know about the gun?

Andrew slipped inside, unsure what he would do if the answer was yes.

To Be Continued…
Click here to read Part Two!